Small is Beautiful: the Environmental Benefits of Home Working

By Erika Watson on March 29, 2010 in Blog, Inclusive Entrepreneurship, Women in Business

As world leaders head to Copenhagen to trade ideas, if not actions, on a low-carbon future, let’s hope their reading lists are not restricted to the new and shiny. 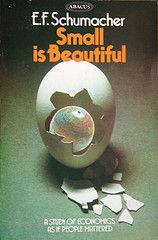 Thirty five years ago EF Schumacher wrote ‘Small is Beautiful‘, which predicted the devastation we now see from squandered natural resources. He called for an economics of permanence to replace the economics of limitless growth. Small scale solutions Schumacher argued “are always less likely to be harmful to their natural environment than large-scale ones, simply because their individual force is small in relation to the recuperative forces of nature.” Recent research from the Smith Institute think tank looked into the environmental benefits of home working.  Their report suggests that home-based self-employed people can deliver considerable environmental benefits from reduced commuting, congestion and other lifestyle changes. Three quarters of all home-workers are self-employed people, and they make up at least 40% of all UK businesses (and most women’s businesses). What’s more, most have fairly modest incomes so they consume less too.

Schumacher considered that capital intensive work is ultimately dehumanising and that those who have more control over their work are more satisfied. This tallies with research which finds that those who work for themselves are generally considerably happier than those who are employed. On average the self-employed have lower incomes and often have to work bursts of very long hours, but all that is more than compensated for by the positive benefits of independence and having control over your work. One study found that during a ten year period in the 1990s well-being among employees dropped, while it went up for the self-employed. Beyond a threshold level, wealth and growth doesn’t make any of us happier. In fact we start to get a negative relationship – social dislocation, less time for family and friends, disagreeable jobs – which has an impact on health and a social cost.

Despite those economic, social and environmental efficiencies, self-employed home-workers are largely dismissed by policy makers as ‘lifestyle’ businesses. Aided by the proliferation of cheap new technology and redundancy push, it’s an economic choice which is spreading anyway.

We still need smart growth; we need a cure for cancer and new environmental technologies. But we also need to value, support, enable and develop 21st Century infrastructure for small and beautiful micro-businesses.